10 Facts about a Kid’s Favorite Bug: The Ladybug!

Now that Summer is rolling around, there are more creepy-crawlies than ever, much to the happiness of some people, and the disgust of others. But for kids, it’s always a thought-provoking, if not fun time! Ladybugs are one of the few harmless bugs to humans out there; biting insects are everywhere, and the ladybug is a relief in that aspect. Since the ladybug captures the attention of both adults and kids alike, here are 10 short, but awesome facts about the adorable ladybug.

Although they can bite (a surprising fact which will be discussed later), ladybugs pose no legitimate threat to humans. In other words, no human being will ever be killed by a lady bug, which actually is possible with bugs like bees (especially killer bees) and some spiders.

Aphids are the snack of ladybugs, which makes ladybugs highly prized in gardens. Aphids are small green creatures that love to eat fruits and vegetables in gardens and ladybugs keep them in check.

Ladybugs may be cute and loved by kids, but they are still beetles that can bite. And, you may think that their bite is like a daddy longlegs’s bite that it is harmless to humans because the teeth can’t actually pierce human skin, but not so.  The ladybug can bite humans.  Despite this bite, they aren’t dangerous and no blood is actually taken. Usually, instead of biting, they secrete blood and the pungent odor of blood, which is actually quite creepy and gross, when you think about it.

Well, ladybug spots actually help identify different species, and also to ward away predators, because the spots convince other animals that the ladybug is poisonous or tastes bad.

When we think of a ladybug, we usually think of a red-winged creature with black spots all over it, right? Well that isn’t always the case. As I mentioned before, ladybugs spots are used to identify species, and some have stripes, some have one spot, and some have no spots at all! It’s really a strange world, isn’t it? 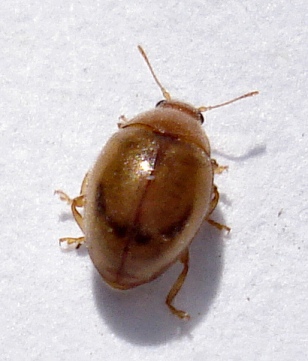 A brown ladybug without spots

7.   Where to Ladybugs go in the winter?

Actually, they hibernate similar to a bear during the winter, and come out in spring and summer. This always seemed odd to me because we don’t think of bugs being complicated enough to have sleep systems, like hibernation. So it’s surprising to think that the bugs settle down for winter (sort of like we do)!

8.   Despite the name, not all ladybugs are ladies!

Some ladybugs are male and some are female, and the name ladybug has nothing to do with the actual gender of every bug. Some think that the ladybugs were named after the Virgin Mary.

Similar to many other bugs, ladybugs taste and smell with their antenna, but a thing that’s a little unusual is that they also do that with their feet.

Although there seems to be a general agreement between people that insects aren’t exactly the smartest or most conscious creatures, if that at all, mostly because it’s so hard to study ladybugs and other insects and what they are thinking, but my theory is that bugs think like everything else, just in a more straightforward way. They think about food and the things they need.

What do you think about ladybugs?

To read about some more nefarious bugs see my book review of Wicked Bugs by Amy Stewart.

One comment on “10 Facts about a Kid’s Favorite Bug: The Ladybug!”

This entry was posted on May 13, 2018 by kidsanimalstation in Animal Facts and tagged aphids, ladybird, ladybug, ladybugs, spots.