Rats: The Beginning of the Paris Catacombs? 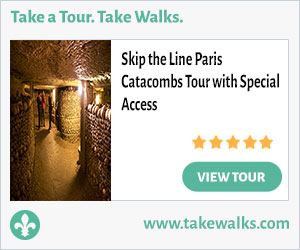 After you read this post, if you enjoyed it, and the Catacombs sounds like someplace you can or would like to visit on a trip to Paris, be sure to check out TakeWalks tours with the link above!

Yesterday, I visited the Catacombs of Paris, which is an underground graveyard created and popularized in the 18th century. What’s more interesting than the underground placement of the graveyard is the way the bones are arranged: by physical size instead of social rank. While I walked through the Paris Catacombs, I couldn’t help but notice the bones stacked thickly against the walls creating haunting designs, and wonder how it came to be. Turns out, rats may play a big part in the creation of this underground tomb.

The Catacombs were originally a large quarry mined for limestone, a common building material in the 1800s. In fact, the limestone from the catacombs was used to build the Notre Dame.  The quarry, however, were used to solve two problems of Paris  — cave-ins and an overrun of corpses!  The catacombs were repurposed into an ossuary (a place to store bones). Interestingly, multiple epidemics of disease were spreading through Europe, causing cemeteries to pile up with more corpses than they could bury and more people contracting illnesses. To solve this problem, they moved the decaying, diseased corpses down into what eventually became known as the Catacombs of Paris.  Eventually, bones and bodies were transported to the Catacombs from other cemeteries.

Rats come into this story with the problem of the disease epidemic, which caused the quarry to be repurposed into the Catacombs. Many of the diseases in the epidemic, including the most deadly, most common and most feared disease: the black plague, were spread to humans by rats. In nineteenth century Europe, it was common to see rats scurrying across the sidewalk and hiding in any small, dark spaces possible, making human-rat interaction unavoidable. It didn’t take long for humans to contract sicknesses from diseased rats. What made these illnesses so potent was the fact that they were new to the human body, so no one’s immune system knew how to fight them off. Without the rats, there probably wouldn’t have been such an outbreak of diseases, which shaped modern Europe to have places like the Catacombs. Although I’m focusing specifically on the Catacombs of Paris, there are underground graveyards like it all over Europe.

As it turns out, not only were rats the catalysts of the Catacombs, they also occupied them. In fact, when reporting on the Catacombs around the time they were created, Louis-Sébastien Mercier wrote: “Beneath these mass graves, which strike the greatest terror in the universe when glimpsed, rats live among the human bones, disturbing and lifting them, seeming to animate the dead as they indicate to the present generation the ranks among which they will soon stand: here, the debris of humanity is placed, not according to past rank, but to physical size.” And with that, I rest my case. Even if rats weren’t the main starting point of the Paris Catacombs, we can now confirm that rats were directly involved with its creation, and overall creepiness today.

Don’t be fooled by Jones’s cute exterior: beneath it lies the blood of his ruthless ancestors (which is clearly demonstrated by his hat).

2 comments on “Rats: The Beginning of the Paris Catacombs?”

This entry was posted on June 3, 2016 by wordsartanimalsandlove in Advice/Reviews and tagged bones, catacombs, death, disease, graveyard, paris, rat.