Whether they look similar to us or not, many animals possess features that are common to the ones that humans have. Humans seem to have an obsession with distancing themselves mentally from other animal species in a variety of ways, like behaviors and characteristics. Here are five animals that have qualities often thought to be unique to humans. A couple of the animal species on this list have some physical qualities similar to humans, while others have certain mental qualities like humans.

When thinking of animals that use tools, the first thing that comes to mind for most people is chimpanzees, but crows have also been proven to make and use tools to their advantage. The act of using tools was originally thought to be a skill that only humans had, until intelligent animals like elephants, sea otters, dolphins, octopuses, degu (chinchilla-like rodents that have been observed using rakes to get food), and the previously mentioned chimpanzees proved them wrong. Recently, scientists have found that crows, specifically New Caledonian crows, will use tools like sticks and wire to reach food, and, they learn from techniques that don’t work and improve upon them to make them more effective. 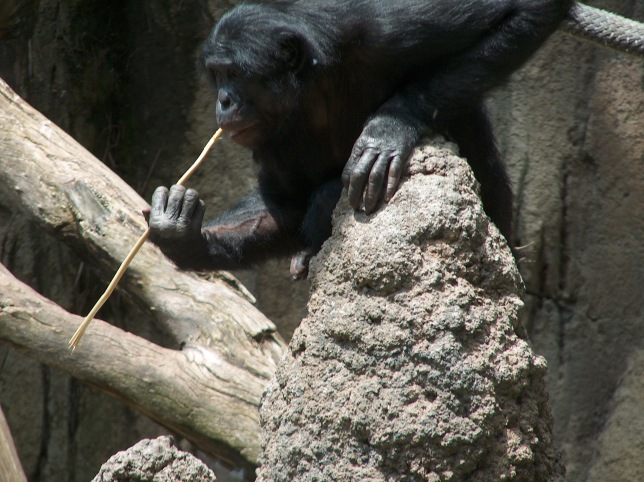 A bonobo using a stick to get termites for food.

Scientists have found that bonobos and chimpanzees share 98.8% of their DNA with humans, so it’s not very surprising that bonobos look an awful lot like humans (technically, humans look an awful lot like bonobos). Then again, humans do share 50% of their DNA with bananas, so maybe that’s not saying too much, but the physical resemblance between bonobos and humans is unmistakable. There is a lot of attention to detail when it comes to the similarities between humans and bonobos. Not only do bonobos have fingerprints, but their fingerprints, like humans, are unique to that individual. Another example of the close relations to humans is that bonobos have a hand preference of the right or left hand. Like humans, most bonobos are right-handed, but some have been spotted using their left hand for most activities.

In nature, pairs of swans have been observed mating for life, which is another thing that only humans were thought to do. The only reason a pair of swans will break up is if one of them has been killed or captured/put in a place where it’s impossible to communicate with. However, as to humans, there has been some debate about this, for many reasons. One reason many scientists argue is that humans themselves aren’t necessarily creatures that mate for life, considering the 40 to 50 percent of married couples in America get divorced, and most people don’t stay with the first people they ever fell in love with/dated forever. In general, life long companionship is possible in humans, and a pretty small amount of animals mate for life, so I am personally ruling it as valid.

Whether or not animals have personalities is a debate that has been going on for a very long time. Theoretically, the most complex animals have been seen to have personalities, or, at least something resembling them, but elk were one of the starters of this debate. It began when residents of Banff, Alberta noticed that some of the elk in the area weren’t afraid to graze in human places, while others wouldn’t dare to set foot on human property. The realization led to scientists conducting tests to see if some elk really were born brave, and others cowardly, like humans. This doesn’t seem like that big of a deal now, considering that there are studies being performed on many different species to see if they have personalities today, but elk helped start the conversation, so, props to them.

Me and Jones, who is rocking a little wizard hat (and looking horribly embarrassed)!

I know what you’re thinking. “Rats? Your number one choice for animals with human qualities is rats?” Actually, if you know me, you probably aren’t surprised at all — hear me out first. For this one, I’ll be talking more from personal experience, and less from fact, so don’t take what I say to be 100% correct, but I do have some pretty good points. Well, as many of you know, I’ve owned 3 rats before, and, in third grade, I did my science fair project on my first rat, Jones (I bet someone’s gonna complain to me about using an animal in a science project). In my project, I created a mini, rat-sized maze from Styrofoam, and put Jones through it, trying to see if there would be a difference in how fast he completed it, depending on whether the lights were on or off. I found that, in the end, it didn’t really matter how much light there was in the room; he completed the maze around the same time, every single time. However, while going through the tests, I found something much more interesting: whenever I had him run through the maze the first couple times, Jones kept jumping over the walls of the maze. Only after I heightened the walls of the maze did he actually try to do the maze without cheating. This may not seem like that big of a deal, I think that the type of thinking that led to those actions is one of the most human qualities out of them all. In a way, he used logic to get out of the situation he knew he didn’t have to be in, and ended up using the things around him in a way that was opposite to how they were supposed to be used, which seems like a pretty human thing to do. Although, you never know, this may have just been Jones’s laziness showing through!

This entry was posted on March 20, 2016 by kidsanimalstation in Animal Facts and tagged bonobos, crows, elk, Humans, rat, swans.