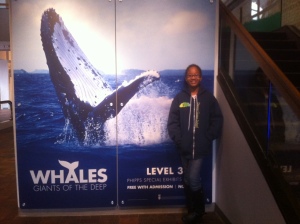 Recently, I went to the Whales: Giants of the Deep exhibit at my local nature and science museum. At the exhibit, there were some pretty cool facts about the biggest creatures on earth. Even though I think whales are pretty wicked, I would probably never go 2,000 miles deep to see them. And, after seeing how awesome whales are in the exhibit, I decided talk a little bit about just how cool these giants can be.(Note: in no particular order.)

10. Killer whales, or Orcas, are the largest type of dolphin. Dolphins are actually a subspecies of whale. For something nicknamed “ killer whale” you wouldn’t think of one of the most innocent creatures ever, would you?  Maybe “ Free Willy” wasn’t that far off.

9. If one whale gets hurt and floats to the bottom of the sea to drown, its peers will lift it up to the surface to give it air.  It seems like whales are more sincere than humans. Well, with such a big brain, there’s no telling what whales are capable of.

8. 300,000 whales die every year because of fishing activities. They often get strangled in the net, drown, or get speared in the butt. Ouch. There are many groups working to stop this cruelty, but whales still die. I would be part of one of those groups, but their missions are dangerous and with my straightforward and blunt emotions and actions, some one would probably get speared in the face.

7. To find each other to mate or form groups, whales give out low frequency vibrations and sounds, some of which humans cannot hear. Whales cannot come up to the surface and talk, so the main way of communicating is this sound system. There is however, one male whale that can only emit frequencies that are a bit too low, so no whales can hear him when he calls for a mate. The whale has been dubbed “ the loneliest whale on earth” and for as long as he doesn’t accidentally bump into another whale, he will stay that way.

6. Only toothed whales (dolphins, sperm whales, orcas, etc.) use echolocation to hunt and find predators. Whales like the humpback whale have baleen instead of teeth. Echolocation is surprisingly accurate. Imagine if humans had echolocation. You would never have to stumble blindly through your kitchen at midnight in search of a snack again.

5. Contrary to popular belief, whales aren’t really dangerous in the slightest to boats. Sometimes whales will obliviously knock the ship around in its wake, but rarely is there any real damage done. Moby Dick is not the best story to take advice from. The only time a whale might seriously injure you is when there is an 8-foot long spear lodged in its back. Understandable, right?

4. Whales’ ancestors from about 50 million years ago used to be land creatures. Then, well, I don’t know, they jumped into the water and evolved into whales over millions of years. Even weirder is that they were toothed carnivores. Being killed by a whale would be nothing to brag about.

3. Whales have the same ancestors as pigs, cows, and hippopotamuses. Then again hippopotamuses are not all that far off when you think about it. Hippos are nicknamed “ water horses” for a reason. Next time you see a cow, pig or even a hippopotamus, compare the similarities and see what you come up with. It’s a shame whales didn’t take more similarities from pigs. Imagine a huge, pink, snout-nosed whale with a squiggly tail swimming around.

2. Of all the subspecies of whale, toothed whales are the biggest. All toothed whales eat mainly fish and most can defend themselves pretty well. Sadly, quite a few dolphin have recently died because they choked on garbage and trash.

1.  Some dolphins and other types of toothed whales will rescue humans when they are swept out to sea, and have saved the lives of some pets. There are plenty of stories of dolphins saving humans and it isn’t just dolphins, a bunch of other animals. To thank them, humans destroy their habitats, kill them, and use them for lab experiments, but that’s another blog post entirely.

This entry was posted on February 15, 2015 by kidsanimalstation in Animal Facts and tagged cow, dolphin, hippo, pig, whale, whales.