What President Had a Hyena for a Pet? First Book Review 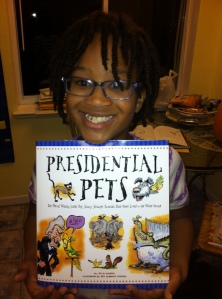 This weekend, I read Presidential Pets by Julia Moberg. In this book, it talks about the pets presidents had. The book also has poems and facts about the presidents and their wild, weird and wacky pets.

Our presidents have had a bunch of different animals, not just ordinary pets. There were lots of presidents who had just a dog or a cat, like President Obama. (There was also a president who didn’t have a pet at all, Chester Alan Arthur.)

But, let me tell you about the presidents who had not very normal pets:

* Another president, James Buchanan, had two eagles, two elephants and a dog!

* Calvin Coolidge Jr. had dogs, cats, birds, raccoons, two kittens, a goose, an antelope, a donkey, a bobcat, a lion, bears, a hippo (!) and a wallaby.

Presidential pets can get national attention. George Herbert Walker Bush’s dog called Millie was called the ugliest dog by the magazine the Washingtonian. Even Senator Bob Dole spoke out to support Millie, and the magazine apologized and sent Millie treats.

If I were president, I would have all of the animals in this book combined at the White House. Presidential Pets let me know that the White House can be a place where there are lots of pets and where pets can roam.

Even though I hope to live in the White House, I hope President Obama stays another four years. (I’m barking for Bo!)

2 comments on “What President Had a Hyena for a Pet? First Book Review”

This entry was posted on October 30, 2012 by wordsartanimalsandlove in Advice/Reviews and tagged bird, cat, dog, hyena, pets, rat, reptile.